Never heard of such a thing.

However, Dennis over at Too Many Grandersons Verlanders sent me a great box of Tigers he longer could use along with a 1990 Topps Traded set.

Here's the deal, Dennis had a contest that required readers to pick free cards and then for every choice increased your odds of winning more cards.  There has to be a catch?

Nope, sure enough, the mail came and there were Tigers cards a plenty, however the Quad Relic with Verlander & Billingsley went to someone luckier than I (what do I have to do to be a winner?)

But as Sparky Anderson would say, "It costs nothing to be nice", thank you Dennis for being so kind to the blogosphere!

This is really only a small glimpse into what he sent.  The last two cards of 2005 Upper Deck were quite familiar and when I went to go sort them out, I was surprised to find the entire team set in there.  For some strange reason I had not recorded acquiring this team set, probably last summer and quickly updated the list!

Another truth to collecting:  you'll never know what you could find getting back into the cards you already have.

Thank you Dennis!  A package of Phil Garner's is headed your way!

We interrupt this baseball card blogging to poll the audience.

If you read this blog --- I assume people do. You may recall a couple of weeks ago that I have began working on a card table for storage, sorting, etc.

Okay, so I put three batches of epoxy down (mostly all at the same time) and have a few sticky spots.

I went to Mr. Home Depot for some advice, they advised to wait it out.  I have waited almost three weeks.

So, consulting the World Wide Web, by all accounts, it appears this side effect is due to poor mixing.

The fact of the matter is I need a solution.

Friends with experience have offered these:

I would appreciate any and all help.

A recent mailer was sent in by blogger Bru of Remember the Astrodome, and he did not disappoint!

He was spot on with some needed, quality Tigers.

The next two complete some team sets for me, thanks Bru!

After perusing Bru's want-list, he mentioned a Jim Morrison ERROR card from 1988 Donruss, so I double checked by own dupe box and collection to see if I had the cards for my own,

and sure enough in the dupe box I had the error card and filed appropriately now in my team set collection. Thanks again!
A return package is headed to Houston Bru!!!!!!!!!!!!

Martinez had 10 Home Runs in Toledo before being called up by the Tigers in May.  Why Houston let him go, I have no idea.  They said he was the odd man out with Dexter Fowler, George Springer, and...LJ Hoes? Robbie Grossman?

Since Topps is ever so eager to recycle images, all they have to do here is photo shop some Tigers away gear and it's solid!

I am now looking for any and all JD Martinez cards, at least for the rest of the season.

The Tigers, along with JV may be slumping, However, all is not lost.

I am reminded that the Jedi sent me his best pull ever last week. 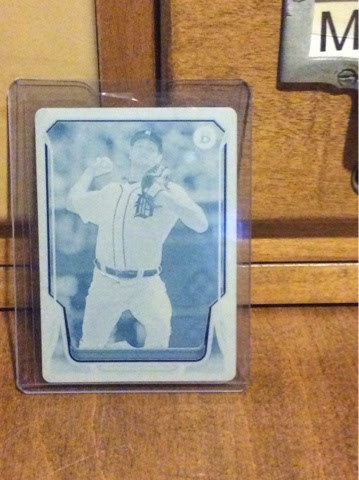 Thanks a ton friend!

(Notice the background, it will be for a future post, but comments on a guess of what it may be could get them a PWE shipped their way!)

Here is an update on the table 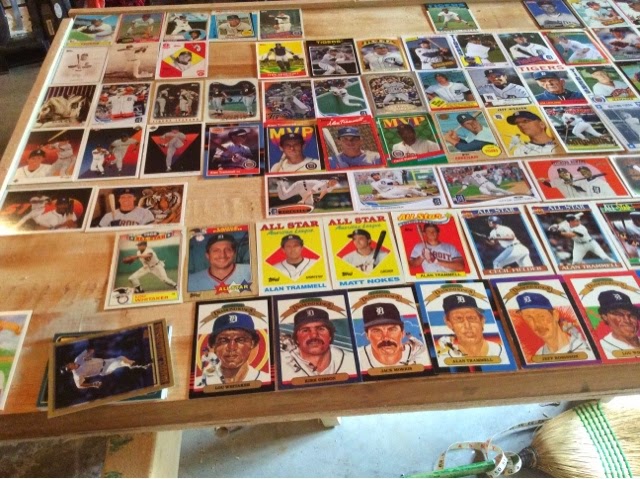 From left to right, we have the Diamond Kings in order on the bottom border, the second row is an All-Star Line, 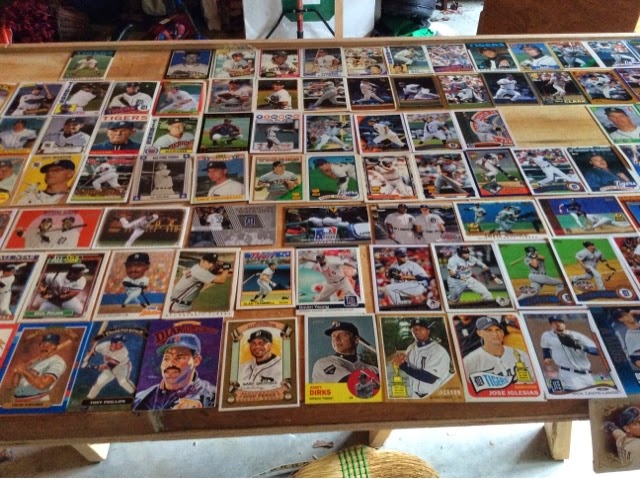 The Center has a combo line of rookie cups, some managers, continuation of the All-Star line 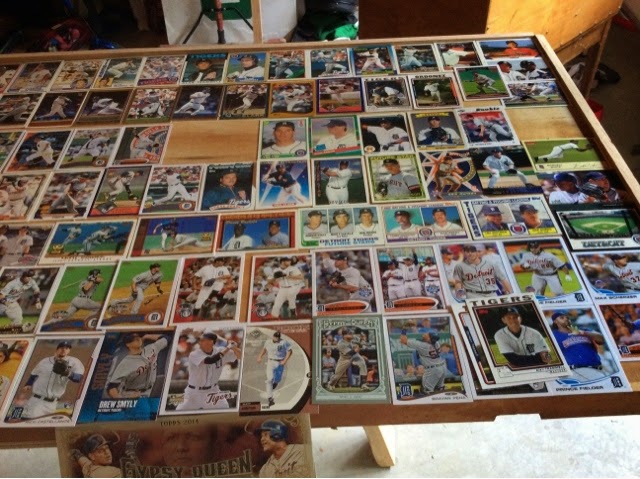 At the top of the right board starts my Trammell tribute, every Topps card since my birth (1980), at 1996 I tried to pick the best Tiger (I know it is like splitting hairs from 1996-2003) or the best free agent signing.

I am hoping to put down the epoxy by the weekend, there may be some late adds with Series Two & Archives out.

It really is getting tough, and fun, deciding who will make the final cut.

Listen folks, I am not creative in the least.

My first job out of college, teaching in Mississippi, I had a roommate who was an art teacher, she said she could teach anyone to draw, anyone, seriously --- I believe in all....

....after about 20 minutes she determined that I was the only human being she could not teach to draw, so you can tell what we're dealing with here.

So with all this Topps Future Stars rebirth, I have had a curiosity into what in the world the John Smoltz Future Star card  would look like in my collection from either 1987 or 1988? (I know! They didn't exist in 1988, but it would be a lot cooler if it did!)

If Jim of gcrl is listening (reading), I sure would appreciate a custom card of Smoltz as a rookie Tiger.

I can't determine what side of the 1988 Doyle to add to the table, any thoughts? I am highly susceptible to peer pressure.

These Upper Deck team cards make up the next six cards for my card table.

These 14 Diamond Kings will make up the 144 cards going on the card table.

I believe I need extras for these Cecil Fielder